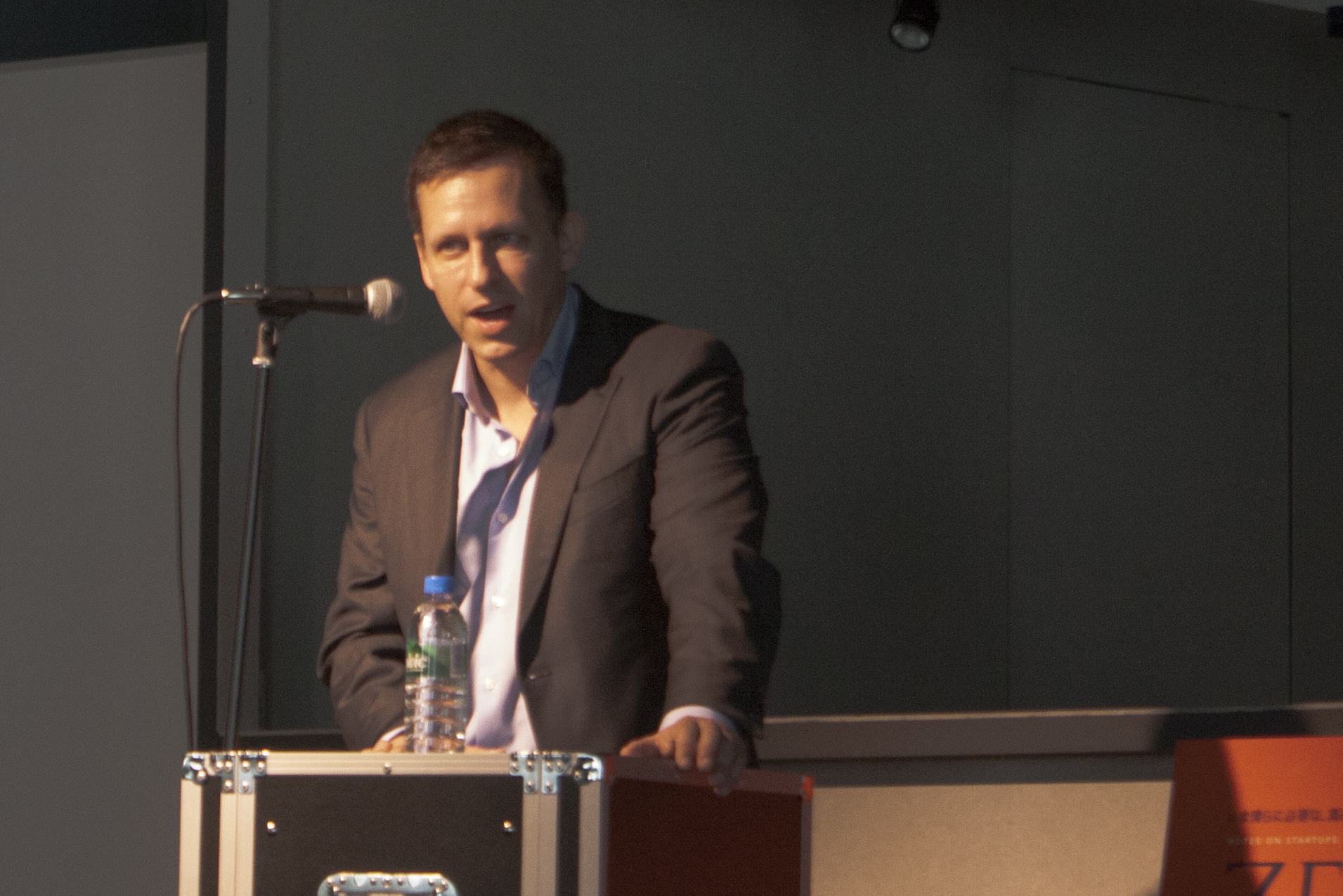 Peter Thiel continues to share his advice for aspiring entrepreneurs.

If you were a 22-year old Japanese in Tokyo, what business would you start?

I think everyone needs to start at something that you’re good at, that you’re very interested in and not so many people are doing. It’s something that only you have, which you have to figure out. It’s not always just being against convention, it’s also doing something that actually makes sense. It’s always a very good idea that for some reason other people don’t pursue.
In the U.S. there are 20 thousand people who moved to Los Angeles to become movie stars. They’re probably quite good at acting and quite passionate, but we still suspect that this is not a very good idea because there are too many people doing it. There may be 20 people out of 20 thousand who succeed every year. So I don’t think it’s always something that you are very good at that other people are doing.

Do you feel one’s natural talent plays a role in his success?

It’s always a question how much of this is nature or nurture, how much is one or the other. I myself was born in Germany and my family moved to the U.S. when I was about a year old. I suspect that had I grown up in Germany that I would have been quite different than how I grew up in Northern California. There’s something about the environment in California that it was considered to be a more plausible thing to become an entrepreneur. So I do think there’s an environmental aspect.
I don’t think that everybody should be an entrepreneur. I actually think that the word entrepreneur is somewhat a strange word. I used to ask my friends, what they would be doing in 10 years’ time. They say it’s very clear that they’re going to be an entrepreneur. That’s like saying “I want to be rich” or “I want to be famous.” You don’t start a company for the sake of starting a company. You don’t do it for its own sake. You do it because you have a really important idea, because there’s some big problem you’re trying to solve or there’s some great opportunity you’re trying to meet. I’m not in favor of starting more companies in California or Japan; I’m in favor of starting more good companies.

What key factors do you look for in potential investments?

There’s no precise formula but let’s say it’s a combination of three factors. One factor is how good the technology is, the second factor is how good the business strategy is, and third is how good the people are. There are different kinds of businesses where the importance is in the various sums. If you have say a biotechnology company who is trying to develop a certain drug, the science is very important. There are a lot of consumer Internet companies where the people don’t have to be that good. The idea is good enough that it will make up for a lot of mistakes.
There are these big critics on Twitter, even websites that promise flying cars although all they got is 140 characters. I think Twitter is a really successful business even though there are many ways in which one could say that it’s been poorly managed. It doesn’t matter because the idea is so good.
As an investor, the question I always end up asking is, is this a good investment and the contrary part is why do other people not see it? So if everybody understands it to be a good investment, it’s actually likely not to be that good. The really great investments are somehow good ones that people don’t understand. It’s often whether some systematic blind spot that investors have.
The other thing I found that has worked well in venture capital is that there’s always temptation to resist. Luck is always that big risk word where on one end it can be something about the nature of the universe. Or ultimately it can be a state of our own laziness. Always resist the temptation to say that you can’t figure things out or else you’re just writing a lottery ticket. Once you think so, you are losing capital.

Do you have any advice for young startups working against vested interests?

Yes, I think I’m always nervous about investing in something where the regulatory barriers are very high. For a small business it’s always much harder than for a large established company that knows how to get around these things. In a way, PayPal was in somewhat a grey zone. It was this new kind of thing. We first said that it was something new, therefore there were no regulations that applied to us. The people who didn’t like PayPal said that PayPal was really a bank. Of course a bank is heavily regulated, and so over time we tried to reposition ourselves as a money transfer service, which in the US is relatively lightly regulated.
In general, I don’t like companies that go directly against established vested interests because I think that a lot of regulations are unclear that they get interpreted very severely when you go directly against various established vested interests. I think Airbnb will have an easier time to comply with regulations than Uber; Uber goes directly against taxis, while Airbnb goes indirectly against hotels and it’s not a matter of life and death for hotels to shut down Airbnb.
There is this buzzword in Silicon Valley that you should always disrupt. Napster was a very disruptive company. It took on the whole music industry. When the people who started Napster got on the front page of the Time magazine, the next year the government shut it down. I do think that the competition is important; I also think it’s very important how you position this company.
The name that you give to your company is a very important decision. Napster is kind of an unfriendly name in English. You nap music, you nap a kid, and you’re a kidnapper. So if you’re a napster, you’re someone who naps things. That sounds like you’re kind of a bad person – maybe the government should shut you down. People can disagree about what the connotations of names are. I like Airbnb, a lot better than Uber. Airbnb’s virtual bed and breakfast sounds small and friendly. Whereas Uber sounds like a word from Germany in the 1930s and it sounds like you’re above things, particularly the law. If you’re in a regulatory gray zone, you don’t want your company’s name to say “we’re above the law”.

What advice do you have for aspiring entrepreneurs?

Oh boy. When I meet people who have started a company, I always like asking a question about what the pre-history was. The bad answer to the pre-history is that the two founders met at a business function a week earlier and it’s like you met somebody at a slot machine in Las Vegas and it might work out but it’s a very bad idea. A good answer is that you’ve been friends for 3 or 4 years, you have this very good relationship on the business side and on the technical side. So these pre-history questions are very important.
When we started PayPal, we did not know if for certain it was going to work or not, we hoped to build some great friendships, some great relationships in the course of that business that would then carry over through decades into the future. I think that’s a really critical thing to try to gain in your years in college or whatever you end up doing later in life.

Zero to One: Notes on Startups, or How to Build the Future