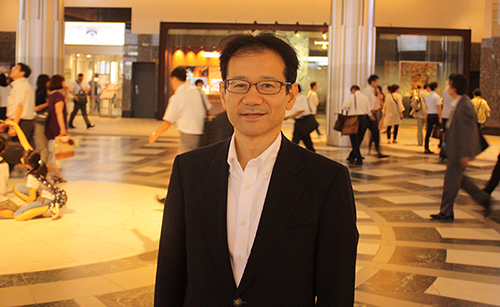 Before I even met Kan Suzuki, I was aware of his reputation. Also known as “Suzukan,” Mr. Suzuki continues to be an opinion leader in the field of education, even though his stint as Deputy Minister of Science and Education is over. Upon attending his passionate lecture, I was instantly inspired like many of my classmates. I interviewed him to find out how Mr. Suzuki became the “Suzukan” as we know today.

You stand out as a community builder. How did you hone your leadership?

No one is a leader from birth. As I helped run clubs as a student, I gradually developed my managerial skills. Eventually, my peers began assigning me leadership roles.

I attended Nada School, where teachers respected students’ autonomy. Building teams in such a free environment brought me great satisfaction.

In high school, I helped run the school festival and sports day events, hence my nickname then, “festival man.” I also lead a research team pertaining to social science. I even managed a soccer team. Despite the absence of a coach, we won the championships in the Kobe league.

Later at Tokyo University, I became involved in the Neverland Musical Community as well as the Lodging Committee.

You later started working at the Ministry of International Trade and Industry (MITI).

I continued to study political science in graduate school, and even considered becoming a teacher. Working at a TV network also seemed attractive.

Still, I was always interested in public service. Many 2nd- and 3rd- generation politicians come from prominent lines of predecessors. I was only the son a salaryman, so I decided to pursue a career as a bureaucrat.  MITI was involved  doing jobs similar to that of publicity agencies, TV networks, consultants and such firms in the private sector. For instance, they produce the Tokyo International Film Festival. When I joined MITI, I partook in the launch of the Japanese Football League and the bringing over of the Soccer World Cup. My experience as a bureaucrat assisted me later during my time as Deputy Minister of Education.

What are you currently involved in?

I focus mainly on my teaching roles at Tokyo University and Keio University. However, I’m also taking part in promoting sports and music.

I helped pass copyright-related laws when I was a member of the Diet. Now, I am an advocate for the commercial viability of the music industry as part of my role at JASRAC (Japanese Society for Rights of Authors, Composers and Publishers).

Also as a director of the Japanese Football Association, I work on enhancing our relations with relevant committees overseas like FIFA.

You’ve been an active community builder, leading projects such as setting up clinics inside train stations and establishing community schools. None of this could’ve been possible without collaborators. How did you make things happen?

Before anything, I focus on extended discussions. Without overcoming misperceptions, projects don’t succeed. So I continuously articulate my thoughts to make sure I’m understood 120%. It’s also critical to harmonize and complement your collaborator’s position by carefully listening to them. There are no shortcuts. Make sure the entire team shares the same vision on a linguistic level.

It’s difficult to motivate an uninterested person, but if he has the slightest impetus, his momentum will only increase. I think of ways to connect his cause with social and historical significance. Many people want to become a part of history.

To quote Alan Kay, the father of personal computers, “The best way to predict the future is to invent it.”

It was part of my class curriculum in middle school.

My favorite among Ardent’s works.

Diverging from conventional wisdom, the ideas were fresh. I want to apply them on a societal scale.

The Rise and Fall of the Great Powers

I’ve read much historical literature, but this left an impression on me.

Born in Hyogo prefecture in 1964. Upon graduating from Tokyo University Law School, he entered the Ministry of Trade and Industry. Elected as member of Diet in 2001. Became Deputy Prime Minister of Education, Science, and Technology in 2009. Currently holds dual professorships at Tokyo University and Keio University. Also the headmaster of Social Emergence School as well as director for Japanese Football Association.