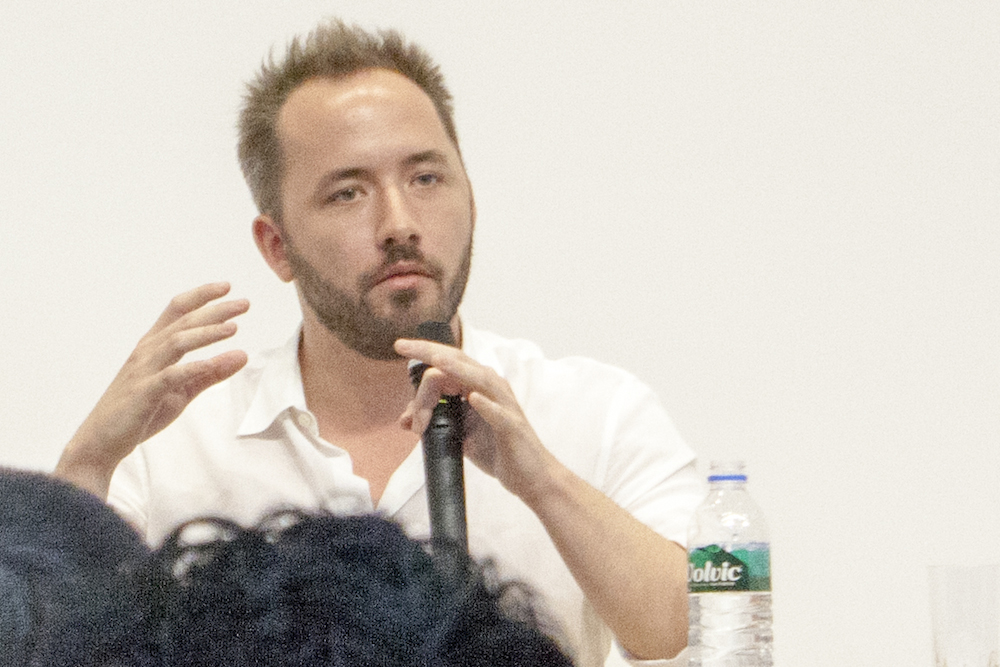 In conjunction with his trip to Tokyo, Dropbox founder Drew Houston took the opportunity to speak at the Globis Business School. After Drew’s discussion on stage, I had the opportunity to ask him for comments about Dropbox’s values and strategies, as well as his experience in the Silicon Valley.

I must confess I’m also a Dropbox user and I would be grateful if you could upgrade my storage.

That’s in the works.

You said that people are basically the most important thing to a company. How do you differentiate real talent from the not-so-talented crowd?

It’s a challenge. One of the great things about going to engineering school is that you realize what real talent looks like. In the beginning, we relied on our investors.
We have 5 attributes that we look for in people.
The first is: be worthy of trust. It sounds obvious but we are storing people’s important personal work information. We are trying to build like a home to take care of all your stuff.
The second is: sweat the details. We find people that have very high standards, that’s really important.
Third: aim higher. When you become successful, you tend to believe the good things that you read about your company. But you know, it’s actually not that good. We all push each other to do better.
Fourth is: “we”, not “I.” When people start clumping up, things start getting screwed up. So we want to make sure the company works together.
So we have the four values, which are all pretty serious. One of our designers made a picture of a cupcake and someone with an adorable smiley face. So that’s our fifth.

You said be worthy of trust. Dropbox started as a friendly startup with a likeable smiley face. Now in your rapid growth, your reputation is changing. In fact, the name of this talk event refers to you as a “Tech Giant.” You’ve hired Dr. Condoleza Rice, former Secretary of State, which may have provoked some negative reactions. How do you deal with your changing reputation and assure users that you still provide the best service overall?

Condoleza Rice is on our board of directors. Unfortunately, when any political figure gets involved, you get pulled into a firefight that has nothing to do with your company. This is a business decision and not a political one. She’s an amazing person in a lot of respects.
I think what you’re asking is about trust. How do you maintain the reputation of your company? First, let everyone in the company know that it’s important. The little blue box is a big symbol promising, “We’re going to take care of you.” We’ve made huge investment in security and the team responsible for it. We make a product that works, fast and reliable. Over time, you build a track record and it’s important to keep it well.

You’ve been recruiting many senior people from other companies, like Google. What are you trying to do better than they’re doing?

Google is a great company, like any that becomes big. Generally speaking, Google’s trying to solve all the world’s problems through their computer science. We tend to be more balanced with a mix of “head and heart.” It’s not like Google doesn’t follow these, but we try to understand people and balance our focus on design and engineering.

How did you come up with the name, Dropbox?

When I started working on it in 2006, the first name was “Folder Anywhere.” That’s when I knew I had a brilliant future in marketing. But then I found a company named “Files Anywhere” so I went back to the drawing board. Eventually we came up with “Dropbox.”

One of the interesting things about being founder or CEO is, nobody tells you what your job is. You always have to figure out what you’re supposed to be doing. In the abstract, you can make good money or good products. The big part of the job is knowing how you can help the company’s business. I spend a lot of time recruiting senior people who could be working happily elsewhere. It’s ultimately how I can help scale the company. Recruiting pays back and makes my job easier. Eventually when you have a full management team, you can start spending time on areas you’re personally interested in. But in the beginning, you have to do everything, whether you like it or not.

It seems as if most founders nowadays are technical. Do you think there are disadvantages to those who are not?

If you’re starting a tech company, it helps to have a technical background. But there are a lot of companies started by non-engineers. I would recommend finding a partner who is technical. Some say it’s difficult to find one, but if you’re doing the business side, you should be able to figure that out. You’re going to have a lot harder things to do. It’s a stereotype that non-technical founders can just find engineers to implement their ideas. Putting in the effort to learn to code or design will give you the empathy to allow you to recruit better.

You’re one of the highest valued companies to have come out of Y Combinator, a startup accelerator in Silicon Valley. How instrumental was their program to your company?

Unfortunately, there’s no way to run the other experiment. It was really valuable. I didn’t grow up in Silicon Valley, didn’t have many connections there, nor the experience or money. Y Combinator has an open application, much like how anyone can apply to colleges. In the program, you see a lot of founders going through the same suffering of starting a company. They bring in world-class speakers and provide a springboard to funding. I don’t review applications, but I still go back as a speaker.

Has moving to the Silicon Valley changed you in any way?

Huge. We’re starting an Internet company, many of which are built in Silicon Valley. It’s like putting your kid in school. Even if it’s two percent better, I would kill someone to get my kid in.

Would you ever drop out of Dropbox for another idea?

You spend so much effort building your company that the idea of starting over is the last thing that comes to my mind. You spend everyday putting down another brick, and eventually you’re standing on top of what you built. What Dropbox does is broad enough that from there, you can do more things that get you excited.

Born in Massachusetts in 1983, Drew Houston graduated from the Massachusetts Institute of Technology. After participating in and founding startups, Drew founded Dropbox in 2007 and serves as its CEO.