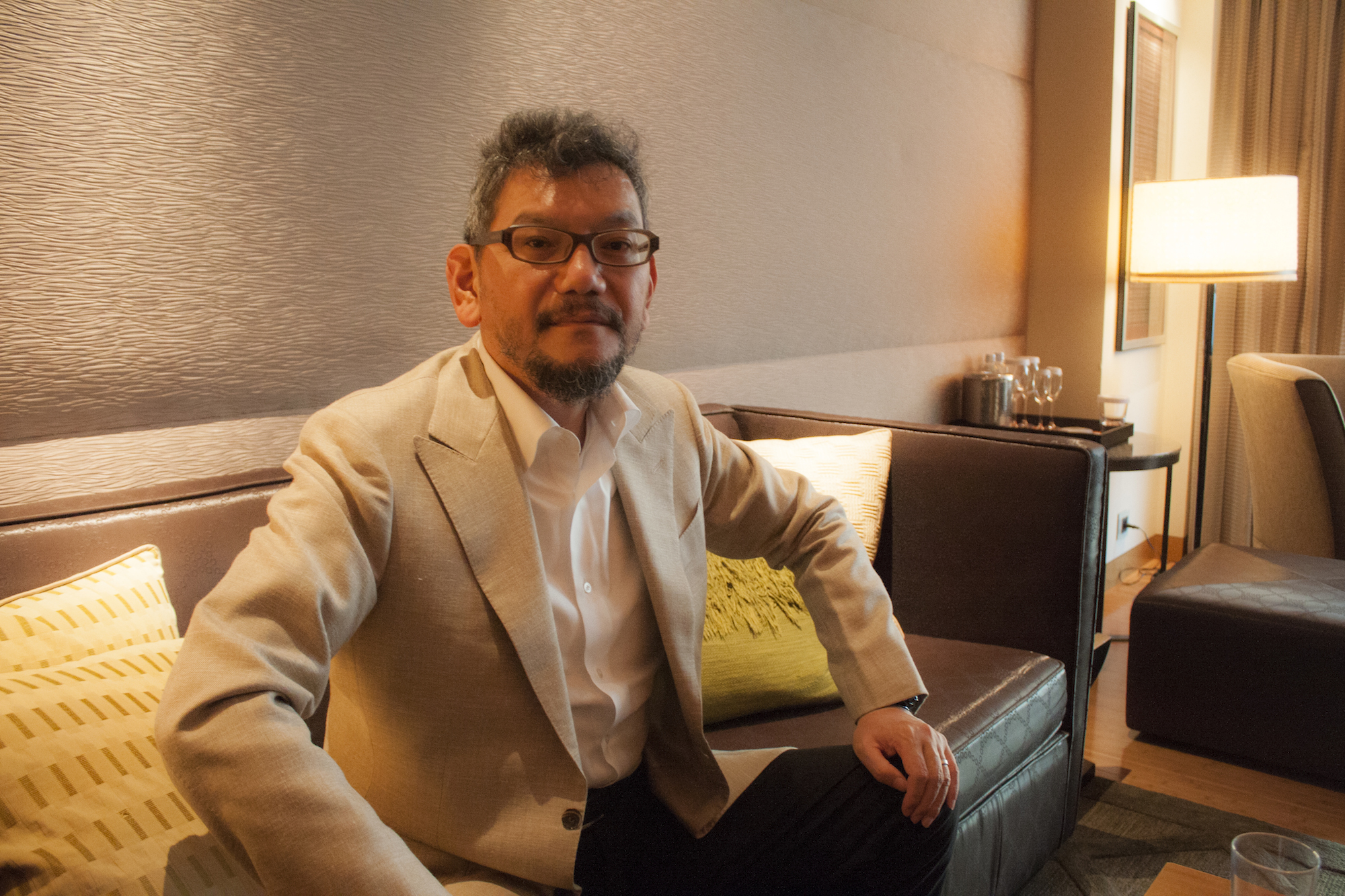 When I was preparing for my college entrance exams last spring, I began watching anime as a pastime. Shocked upon completing Neon Genesis Evangelion, I was entranced by the art of anime. The Tokyo International Film Festival this year hosted a feature on the anime’s director, Hideaki Anno. As I tried to subdue my exhilaration, I took advantage of a fortunate opportunity to interview the maestro himself.

You were already producing your own films and anime as a student. What attracted you to this craft?

I’ve loved animation since my childhood; I can render what I envision in my mind articulately by drawing animation. I did indeed like to draw.

Do you find any differences in the production environment today and then? Tell me how it felt when you worked on your first commercial anime.

I was baffled by the difference in the professional environment and my experience as an amateur. Otherwise, there was no significant difference as to drawing illustrations. Digital methods have been introduced, but the environment’s largely been the same for the last 20 or 30 years.

When you produce your work, what first comes into your mind: the story or the image?

You put a lot of attention into how you depict cities. Where do you get your inspiration?

I’m attracted to manmade structures. I want to draw buildings, electricity poles, highways, and whatever man built with concrete and steel. Additionally, I made sure to depict them authentically, perhaps with exaggeration but without lying. I’m not a fan of half-baked drawings, so I would make sure the details are correct, including trains and crossing lights.

Speaking of trains, you feature train tracks frequently in your work.


Shiki-Jitsu (Ritual)
I use rails to depict a sense of being taken away somewhere. Like in “The Ritual,” the rails won’t ever intersect. I lived near train tracks in my childhood, so I’m fond of them.

Your work delves deep into the human psyche, especially Evangelion.

Animation is a symbolic representation of the world. I aspired to depict humans as raw as I can in the TV version of Evangelion. How far can animation go to express something? How much can it communicate with audiences? As those were my challenges, I’m happy to see that some viewers are grasping them. It attests to what animation can achieve.

As Evangelion finished airing on TV, you asserted that Otakus should return to reality. Have your thoughts changed since then?

My beliefs haven’t changed, but I stressed that most in the TV rendition. I’ve given up trying to reinforce that message, and don’t intend to emphasize as much as I used to. Despite my efforts, people didn’t change and maybe I was an obnoxious nanny, but it was necessary back then. I attempt to push the appropriate message at the right time; in fact, I currently stress a different one.

Recently deceased after battling depression, Robin Williams was such a huge fan of yours that he had Evangelion figures appear in one of the films he starred in. Were you aware of his fandom?

No, I didn’t know that. It’s a pity. I knew about his passing, but never about him being such a huge fan.

You founded Studio Khara to make an impact on the anime industry. How successful have you been so far?

Not enough yet. Also, I didn’t want to change the industry, but rather maintain before possibly crumbling. Without adequate staffing and funding, the range of work produced is becoming narrower, and Japanese animation is losing its diversity. I hope to change that, but for now the industry has to become sustainable.

In a talk with you, anime director Kunihiro Ikuyhara claimed, “achievers are in their late 50s.” As you’re almost approaching that age, what do you hope to achieve?

I can only try to produce films worthy of watching, but likewise I feel I’ll peak in my 50s. I’ll try to make as much before my 50s end. I’d like to produce according to my interests as I age, in a variety of genre whether it be live-action or anime. There’s so many projects I have yet to realize. Please stay tuned for my late 50s.

It appears as if you have been influenced by Stanley Kubrick, particularly his ironic use of classical music and distinctive use of camera angles.


Ultra Operation No. 1
Space Battleship Yamato: The Movie
Mobile Suit Gundam Complete Collection 1 (Anime Legends)
The Complete UFO Megaset
I’ve watched British producer Gerry Anderson’s marionette shows, especially Thunderbird and U.F.O. I am fond of the posh English elegance combined with realistic portrayals. I also must include Ultraman and Mobile Suit Gundam. I wouldn’t say influenced as much as simply say things that I like. What can I say? I love them. Born in Yamaguchi in 1960. After dropping out of Osaka University of Art’s film department, Anno became a founding member of anime production company Gainax with his college friends. Following his directorial debut in Gunbuster (1988), his Neon Genesis Evangelion became a phenomenal hit in 1995. In 2013, he debuted as a voice actor in the main role of Hayao Miyazaki’s The Wind Rises. He is currently president of the production company that
he founded, Studio Khara.