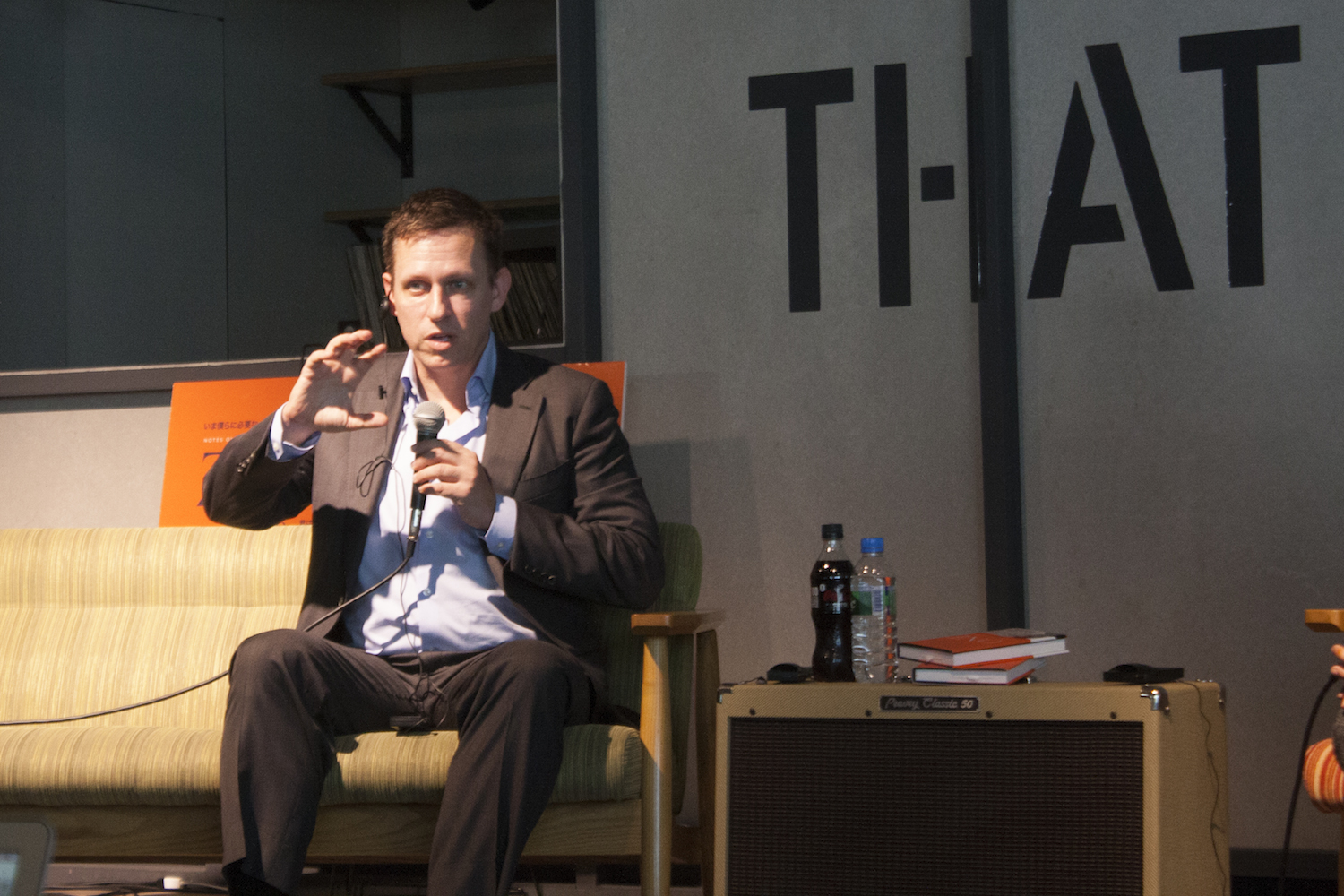 Known as the founder of PayPal and a Silicon Valley venture capitalist, Peter Thiel came to speak with Japanese college students about his new book “Zero to One.” In the following Q&A session, he shared his observations on successful startups, the startup scene in Japan, and whether he thinks artificial intelligence will overtake humans.

I have the impression that there are more creative and inventive startups in the Silicon Valley. Whereas in Japan, the successful ones tend to be yet another app for mobile games, job finding, and e-commerce – they are sure to make money, but are unlikely to be as groundbreaking. What difference do you see in the Japanese startup environment in contrast to the Silicon Valley?

If you look at Yahoo! Japan versus Yahoo! of the US, they obviously changed the business world and improved it in very significant ways. This is evidenced by the fact that Yahoo! Japan is still very successful in Japan whereas Yahoo! in the US is much less successful. So there are some important and subtle ways in which things were changed and I think Japan was very early to adapt to the mobile platform in many ways.

For example you have all these e-commerce clones in Berlin that just copies Silicon Valley. And that can actually work. There are language barriers and such. But I think if you want to create a global technology, you have to actually do something new. You want to create a business that is not just a business in any other country but an export. It has to offer something that people don’t already have and that’s always the general challenge.

Do you see a successful pattern for global market penetration?

I think you want to start in a small market. You want to start to do something people have not yet done and you extend from there. But there is an aspect in technology that is global in nature where you would do well if you are the best in the world or if you are doing something nobody else is doing. I think it’s important to have both a detailed local plan to get started and a broader perspective: you don’t want to be the best business in Tokyo but the 7th best in the world.

It seems like many startups are using buzzwords – currently “AI” is getting attention. How do you feel about these buzzwords?

Just like Steve Jobs with the iPhone, you could argue there was no component of the iPhone that was new but it was the combination that was really the innovation. And so I would extend this analogy now to AI. I think you’re not being asked to have a breakthrough in component. It’s a question of how do you combine the computer technology with everything else? That’s where the innovation should happen.

In the combination argument given in my book, you should think of intelligence augmentation where you help people use computers and get stronger. The idea that underlies AI is that computers will substitute for human beings. So I think the underexplored idea is that humans and computers should find better ways to work together because after all, the skills, the relative strengths are very different. There are some things that computers are much better at, there’s some things people are much better at.

There’s probably a lot of space in finding a complementary way in which they could work together.

Computer Scientists like Ray Kurzweil theorize that eventually we will reach a point of “singularity,” wherein artificial intelligence will exceed human intelligence. Do you find this plausible?

It’s a very open question and there’s nothing about the future that’s set in concrete. My own view is I think not enough people are working with these technologies. So even though people are scared about robots taking over the world or small metal particles destroying the world or all these sorts of catastrophes, I’m much more scared about if that nothing will happen at all.

The founding members of PayPal today are considered as “the Mafia.” After selling to eBay, former employees founded successful companies including Tesla Motors, YouTube, and LinkedIn. How did you get so many amazing people in one place?

One important thing is that PayPal had a lot of challenges and they overcame them. They learned at PayPal that it was hard but possible to build a great company. If you work at a company that’s far more successful that PayPal, like Microsoft or Google, you might learn that it’s easy to build a great company, which is actually a terrible lesson because then there would be a lot of mistakes you make. On the other hand, if you work at a company where everything goes wrong and the company goes out of business, you will learn that it’s impossible to build a great company, so the next time around you would try something less ambitious. I think the intermediate lesson learned in PayPal brought a good mindset.

Both extreme optimism and extreme pessimism are somewhat unhealthy. Extreme optimism tells you “There’s no need to rethink, the future will take care of itself.” It’s just like one of my friends when he was admitted to Yale as a 17-year old freshman. The Dean welcomed the students by saying “Congratulations. You’re at Yale, you’re set for life.” It’s a terrible attitude to believe to be true. Extreme optimism tells you there’s no need to do anything, extreme pessimism there’s no point to doing anything, and they add up to you doing nothing.

With so many talented people in one place, how did you avoid the clash of personalities?

I think conflicts start when people actually want the same thing. So if you are a crazy boss who just wants to get people to fight for no reason, the formula is to tell two people to do the exact same job. So I think one of the challenges of a manager is you always trying to find ways to differentiate people’s roles. It’s a bit of a different challenge in a small company versus a big company. In a big company, people are sort of separated and people seem to manage what they are doing. In a small, early-stage company all these things always end up overlapping and become a source of conflict.

Read the second half of the Q&A:

Peter Thiel to Japanese Students: “You don’t start a company for the sake of it” (Q&A 2/2)

Zero to One: Notes on Startups, or How to Build the Future